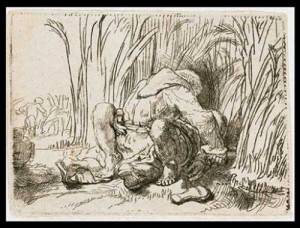 In the summer of 2006, while in college and working overnight shifts in a food market and giving ghost tours in Ocean City, I happened to see a Rembrandt exhibit in Philadelphia.  One of the things that most stayed with me was that the great Rembrandt, master painter, portraitist, and otherwise upstanding gents, had sketched a  series of of dirty etchings.  Like the one above “Monk in a Cornfield”.  It was painted (sketched?  I’m not an artist, wiki it) in 1646 and is considered Baroque, which is funny considering the act it’s depicting.

Being the dirty twisted bastard I am, it took me a while to realize it wasn’t a dude Padre was fucking.  Rembrandt drew all his ladies in these etching with stocky muscular legs and she’s wearing a dress… or she’s a he and another monk, I guess.  I don’t know they told me it was Hetro.

And that didn’t stop me.

On the bus home, I types up Ciaran’s story (he was Cyril at the time) and it was actually originally a very campy, comedic kind of story. Maybe about three pages long, it showed the deed and then a diva-style hissy fit about the nature of God and homosexuality.

Then a professor gave me a book called Before Stonewall, which discussed the history of being gay before the civil right movement in America.  All the articles dealt with America’s early history (that I remember anyway…  I had shit to do that summer, hoagies to make, stories to tell, hotties to… look at).  I do know it made me think about this story and I re-wrote it with the diva hissy fit toned down and made part of Cyril’s thoughts, making the only dialogue in the piece his outcry of “Oh God.”  It was much more serious and probably my first literary erotica as it dealt with more than just cock and balls… though meditations on God is quite hard for me to separate from cock and balls.  He’s called the Big Guy for a reason.

So there is sat on my computer for… six years, shit I’m getting old.

I returned to it again recently while appearing as Friar Laurence in Manly Squeeze’s Romeo and Juliet.  Manly Squeeze had a brilliant interpretation of the play, not the tragedy of the kids, but as the tragedy of unbridled passion.  Romeo who kills two people in the play and threatens a shit ton of others (it’s in the script, check it) was portrayed as insane with grief at the end, like full-on crazy Joker-ish in the tomb with Paris.  Juliet was tearing-her-hair, snotty-nosed tears, screaming suicidal.  It was not a sanitized or pretty version of teenage love and the families were the  figures of denouement (why is that word spelled like that!  Ug, the French) and passion had to be the motivation for each character.

For Laurence, I did a lot of research into Franciscan monks (considered the wisest men in Shakespeare’s time so R + J are really fighting fate and God himself when Laurence can’t help them.   A fucking plague gets in the way!  Great example that even hetros can have the Big Guy forbidding their love).  Most of Friar Laurence’s lines are sermons and mini-monologues ( had forty minutes of lines on my mp3 and that was a quick read through to get the words and stanchion) so clearly God and his will was Laurence’s passion, but then I played with the idea that Laurence was gay for Romeo (because our Romeo was a really hot Japanese kid who I would like to… look at some more because I dearly love my Manly Squeeze.).

It made me think of “Before the Rain” and I took out the story, read it, considered it and eventually rewrote what you see today.  Anyways… “Before the Rain” was not porny enough for any magazines (though it did get me a few editors who wanted less high-brow stuff and eventually picked up some of my college fantasies).  The story was also too explicit for literary magazines, so there is sat on my computer for my enjoyment.  Then an editor who loves to publish what she tells me to write and reject my original stories suggested I indie-pub “Before the Rain” and other good-but-not-what-we’re-looking-for material.  So I did.

By the way, that sexy cover image was all me… and Rembrandt (it’s called Titus as Monk and it was done in 1660).  But I added the text and I… am not as impressive as I want to be…

Read “Before the Rain” here: